In addition to the upcoming guest appearances of CANNIBAL HOLOCAUST star Robert Kerman and Bob Murawski at Flashback Weekend in Chicago, and screening of the Ruggero Deodato classic at the Midway Drive-In, we’ve added another exciting event to our schedule!

CANNIBAL HOLOCAUST star Carl Yorke will appear in person August 22 & 23, 2014, at the Clay Theatre in San Francisco to introduce the film, meet fans and sign memorabilia!

And don’t forget this weekend’s big double feature of CANNIBAL HOLOCAUST and Umberto Lenzi’s SACRIFICE (a.k.a. MAN FROM DEEP RIVER) at International House in Philadelphia! Brought to you by Grindhouse Releasing and Exhumed Films, who hosted the premiere of our restored 35mm print of CANNIBAL HOLOCAUST 13 years ago, as seen on the new Blu-ray!

The same double feature of CANNIBAL HOLOCAUST and SACRIFICE will screen in Los Angeles Aug. 26 at the New Beverly Cinema . Check our updated SCREENINGS page for more cities TBA! 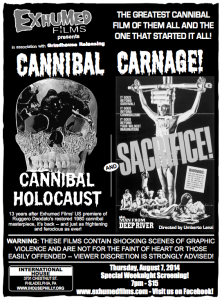