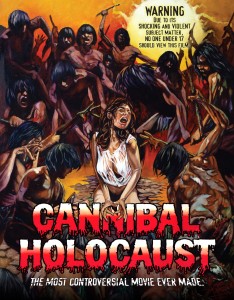 Grindhouse Releasing’s CANNIBAL HOLOCAUST Deluxe Edition Blu-ray is the ultimate home video presentation of this notorious classic named by Entertainment Weekly as “one of the most controversial films ever made”.

Specs for the new CANNIBAL HOLOCAUST Blu-ray are as follows:

– Extensive still galleries and theatrical trailers from around the world

Upcoming Blu-rays from Grindhouse Releasing include Lucio Fulci’s THE BEYOND, Duke Mitchell’s GONE WITH THE POPE, and S.F. Brownrigg’s SCUM OF THE EARTH.

For more information visit us online at www.GrindhouseReleasing.com