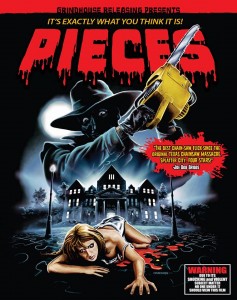 YOU DON’T HAVE TO GO TO TEXAS FOR A CHAINSAW MASSACRE!

Grindhouse Releasing is proud to present the sickest and most violent of all the early ’80s slasher movies. A psychopathic killer stalks a Boston campus, brutally slaughtering nubile young college co-eds, collecting body parts from each victim to create the likeness of his mother who he savagely murdered with an axe when he was ten years old! PIECES is a wild, unrated gorefest, with enough splatter and sleaze to shock the most jaded horror fan.

“One of my top horror films of all time! Not only is this the ultimate chainsaw movie, it’s the ultimate slasher film. It has everything you could possibly want, by the bucketful. Full on chainsaw violence, absurd amounts of nudity, and the greatest ending in horror history. A masterpiece of early ’80s sleaze.”
-Eli Roth, director of HOSTEL and THE GREEN INFERNO

“One of the most shocking exponents to hit the Deuce in the 1980s. PIECES went straight for the jugular… one of the few movies at the time that silenced the most raucous grindhouse audiences.”
-Bill Landis, SLEAZOID EXPRESS

We will be celebrating the release of PIECES in BOSTON, where the movie’s gruesome events take place, Feb. 26 & 27 at the Coolidge Corner Theatre! 35mm print! More screenings to be announced soon!