Click here to buy CORRUPTION on blu-ray from Grindhouse Releasing

The legendary Peter Cushing stars as a surgeon driven to murder and madness as he attempts to restore the beauty of his hideously disfigured fashion model wife.  Co-starring Sue Lloyd and Hammer Horror beauty Kate O’Mara (THE VAMPIRE LOVERS), this special edition contains shocking scenes of GORE and NUDITY previously deemed too strong for American audiences.

Grindhouse Releasing’s CORRUPTION was hailed as “Best Release of 2013” (The Splatter Times) and “the answer to many a horror fan’s prayers…easily one of the most significant British horror releases in the Blu-ray era…definitely one for the ages and, in its own bloody and twisted way, a little miracle most fans never expected to happen.” (Mondo Digital) 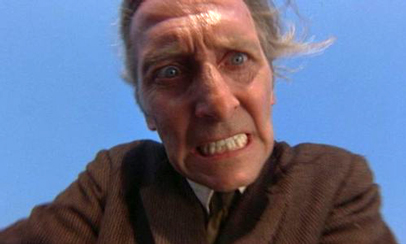 “Far removed from the Hammer fare that defined horror for generations of Brits, CORRUPTION is pure grindhouse. Given its execution, it’s only appropriate that Grindhouse Releasing should be responsible for CORRUPTION’s glorious arrival on Blu-ray…a fascinating gem.” – Rue Morgue

“DISC OF THE MONTH…the widescreen transfers are very fine, rich in color and detail, and accompanied by a staggering amount of supplements for a vintage picture. Foremost is a first-rate commentary by ‘English Gothic’ author Jonathan Rigby and Cushing biographer David Miller…A top-notch package.” – Michael Gingold, Fangoria

“The care Grindhouse has taken with this release elevates the film and makes it a must-purchase for serious fans; in fact, this may be the best a British horror movie of this vintage ever has looked on disc. (The cinematography is by Peter Newbrook, whose second-unit credits include ‘Lawrence of Arabia.’)  Add a wealth of extras — including an audio commentary featuring film historian/author Jonathan Rigby (‘English Gothic: A Century of Horror Cinema’) and Cushing biographer David Miller — and you’ve got a candidate for top genre release of the year.” – John Beifuss, Commercial Appeal

“Corruption is a terrific little thriller, rescued from obscurity and given A-list treatment on disc.  This is the kind of release that can get you excited about the possibilities of home video again.” – Adam Jahnke, The Digital Bits

“One of the most gloriously insane finales I’ve ever witnessed, and whenever you think CORRUPTION has reached its most crazed crescendo, there’s something more unhinged lurking around the bend.  CORRUPTION would be deliriously fun no matter who was in the lead role, but the presence of a master like Peter Cushing elevates it to such heights…This Blu-ray release is a full-blown special edition that piles on two different cuts of the film, and the presentations are about as flawless as I could ever hope to see or hear. Very, very HIGHLY RECOMMENDED!” – DVD Talk

“A madcap medical thriller. Cushing, as always, is amazing. The kills are messy and gruesome…CORRUPTION is a pretty hardcore film for its time, and I couldn’t help but be impressed with how all-in Cushing is in these scenes.” – Ain’t It Cool News

“Grindhouse has put together another fine package here, including a sharply remastered picture, a clean version of the original mono soundtrack, and a great selection of extras headed by an incredibly informative expert commentary track. Even the box is fun – it features double-sided ‘R-rated’ (bra, no blood) and ‘unrated’ (boobs, lots of blood) cover art.” – DVD Active

“#1! Our choice for the TOP DVD RELEASE OF 2013 goes to Grindhouse Releasing for giving us the most enjoyably sleazy Peter Cushing movie of the ’60s:  CORRUPTION. Cushing and director Robert Hartford-Davis also teamed up for the better-known BLOODSUCKERS, but CORRUPTION is the main event – not only the most deliriously deranged film Hartford-Davis ever created, but also a who’s who of ’60s British stars, with Vanessa (GIRLY) Howard, Sue (THE IPCRESS FILE) Lloyd, Kate (VAMPIRE LOVERS) O’Mara, Valeria (SATANIC RITES OF DRACULA) Van Ost, and David (BLOODSUCKERS) Lodge. Special credit should go to Bob Murawski of Grindhouse Releasing, who left no stone unturned in his quest to make this the ultimate edition of CORRUPTION, rounding up interviews with surviving cast members, giving us the alternate nude scene that’s been the stuff of legend for decades, and even finding virtually every international poster and lobby card ever created for this title. The fact that this film has NEVER been released on VHS, laser or DVD in America makes this release all the more monumental. Our only question is…how will Grindhouse Releasing ever top this?” – Donald Farmer, The Splatter Times

“Grindhouse’s all region Blu-ray/DVD release of Corruption is a winner. No matter what one may make of the film itself, there’s no arguing that Grindhouse has done anything less than an absolutely first class job of preserving it in digital form.  Indeed, it should be noted that this film was never issued to DVD officially in the U.S., so this marks a very impressive home video debut – and it emerges, most appropriately, at what would have marked Peter Cushing’s 100th year.” – Troy Howarth, AV Maniacs

“CORRUPTION is a solid thriller/horror picture…Those with an interest in the swingin’ side of British cinema will get a kick out of all the period detail, but the real reason to watch this one is Cushing’s completely unhinged performance. Grindhouse Releasing offers up both versions of the movie in beautiful shape, and with a great selection of extra features as well. A ridiculously strong release overall.” – Ian Jane, Rock! Shock! Pop!

“Director Robert Hartford-Davis does an exceptional job in keeping the suspense, thrills and pacing of the film going strong throughout the running time. I was really impressed by the entire production and can plainly see how CORRUPTION got its unique cult classic status. It’s also really enjoyable to see Peter Cushing outside of his usual Hammer Horror digs. The film has the same kind of perverse feel as Michael Powell’s PEEPING TOM with Cushing’s Rowan stalking and heinously killing the pretty birds. It does truly stand out for its over-the-top and rather unnerving qualities, especially when you consider it was made in the Summer of Love. Grindhouse Releasing has taken this lost ’60s British cult horror classic and brought their usual care and attention to the film restoration giving it a brand new life on home video. The picture transfer is stunningly beautiful and clear with no artifacts. For longtime fans of horror cinema, and of course acting legend Peter Cushing, we highly recommend this exceptional Blu Ray/DVD combo package!” – Grindhouse Database

“Grindhouse Releasing thankfully unleashes CORRUPTION in a very special edition Blu-ray/DVD combo with a stunning new transfer, so even if you’ve seen the film in the past, surely now it’s like viewing it for the very first time. Highly impressive.” – George Reis, DVD Drive-In

“CORRUPTION is one of the unsung greats of British horror, appearing as it did right at the start of a shift in gears away from the gothic and into more contemporary, mean-spirited and graphic movies. This impressive new Grindhouse release, packed with extra content, is very welcome and will hopefully go some way to introducing the film to a new generation of horror fans.” – David Flint, Strange Things are Happening

“CORRUPTION is an awesome disc. Grindhouse Releasing’s Blu-ray is the real deal: fine tech restoration, meaningful supplements, and an overall sense of respect for the film.” – DVD Verdict

“Fans of Peter Cushing and those with an interest in exploitation cinema should consider this Grindhouse release of CORRUPTION a mandatory purchase. It is indeed one of the most important genre releases of the year.” –  Diabolique Magazine

“There has never been a better pairing than Peter Cushing and CORRUPTION. Grindhouse Releasing has a home run…sure to delight fans.” – John Carpenter, Theater Thoughts

“Grindhouse gave CORRUPTION the kind of treatment that Shout! Factory and Criterion typically give to older films, supplementing a beautiful-looking Blu-ray transfer with vintage promotional materials and substantial interviews with some of the surviving cast members (who wax nostalgic about how the atmosphere of the swinging 1960s changed British cinema). The set also adds a marvelously entertaining commentary track by U.K. horror scholars Jonathan Rigby and David Miller, who are full of fascinating tidbits about the history of the production and its cast. They’re terrific company, and make a strong case for CORRUPTION as a classic of its kind.” – Noel Murray, The Dissolve

“One of the best restorations of 2013, packed with a multitude of historical and contextual extras. It’s a gorgeous 2K HD transfer, and Grindhouse should be extra proud of this lovingly assembled tribute to one of Cushing’s sleaziest films.” – Mark R. Hasan, KQEK.com

“This is a great piece of horror with Cushing that has been lovingly rescued and re-introduced to the world by Grindhouse Releasing and I couldn’t thank them more. Highly recommended.” – Celluloid Terror

“An intriguing study in obsession gone mad…And a totally unexpected, powerhouse performance from one of the horror genre’s greatest. Highest Recommendation…with an accompanying applause to the fine folks at Grindhouse Releasing, this one was, without a doubt, well worth waiting for.” – Cinema Head Cheese

Geek Shall Inherit the Earth