GONE WITH THE POPE

Watch the GONE WITH THE POPE trailer! 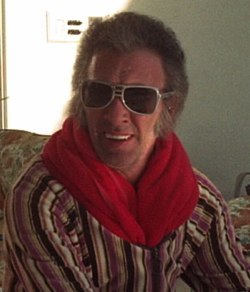 “Of all the films I have been involved with, the one that I am most proud of is GONE WITH THE POPE. Duke Mitchell didn’t live to see this masterpiece finished. I am honored to be the person to finish it for him. Completing this movie was a 15-year labor of love. No expense or effort was spared in rescuing this classic from cinematic oblivion and finishing it with the utmost quality. Our beautiful new 35mm print stands as a testament to Duke Mitchell’s unique and explosively entertaining vision.”

Click here to buy GONE WITH THE POPE on blu-ray from Grindhouse Releasing.

Report from the GONE WITH THE POPE World Premiere at the American Cinematheque’s Egyptian Theatre in Hollywood:

“I could try to describe the plot of Duke Mitchell’s posthumous exploitation thriller “Gone With The Pope,” but the movie poster really says it best. The Job: Kidnap the Holiest man in the world. The Ransom: A Dollar from every Catholic in the world. …You’re either in, or you’re in the way!”  The tag line also serves as a perfect disclaimer.  You either want to see a movie called “Gone With the Pope,” or you don’t.  I definitely did, and I joined a packed house at the American Cinematheque on Friday night for a World Premiere that was nearly 35 years in the making.

Duke Mitchell was primarily known as a Sinatra style crooner.  Early in his career he also had a comedy act with Sammy Petrillo which was so similar to Dean Martin and Jerry Lewis that Paramount sued them for infringement.  Michell was also featured in the 1952 oddity Bela Lugosi meets a Brooklyn Gorilla, and fans of The Flintstones cartoons may also remember Mitchell as the one who provided Fred’s Elvis like singing voice on a number of episodes.  Later Mitchell would spend the bulk of his time as a touring musician, eventually appointed “The King of Palm Springs.”

None of this makes Duke Mitchell seem like a likely candidate to direct such a far out film as “Gone With the Pope,” but one of the film’s strengths is in the way it showcases Mitchell’s larger than life persona.  Whether he’s charting a yacht trip across the world, lighting two cigarettes at once, or showering one of his victims with a handful of unspent bullets, Duke Mitchell owns every frame of the film he appears in.  It’s hard to say how much of what Mitchell does in the movie is acting, or just being himself, but it hardly matters.  His presence is commanding, and as a director Duke was smart enough to know it.

The movie is also surprisingly beautiful to look at.  According to the cast and crew who were present at Friday’s screening (among them Peter Santoro, the film’s cinematographer and Jeffrey Mitchell, Duke’s son) the movie was shot all guerilla style, using almost exclusively 35mm short ends.  For a film with next to no budget, Mitchell and crew managed to shoot in a lot of different locations, all of which come off looking fantastic.  In addition to Los Angeles, the film features sequences shot in Las Vegas, Lake Arrowhead, and even Rome (4th unit, according to the credits).  The 35 mm shots of Mitchell walking in slow motion in front of the now defunct Stardust hotel at the height of its neon 70’s splendor are reason enough to have preserved this film.  It’s also ridiculously entertaining.

The story of how Gone With The Pope came to be unspooling at the Egyptian on Friday after 35 years is almost as crazy as the movie itself.  Bob Murawski, who co-owns Grindhouse Releasing with Sage Stallone, ended up watching Massacre Mafia Style, Mitchell’s previous film, and loving it.  Wanting more of the unique Duke Mitchell style, he set out on a quest only to discover that Duke had died in 1981.

Then [Stallone and Murawski] discovered that Duke’s son Jeffrey only lived a block away, which led to a discussion of Mitchell’s work.  It was at that point that Jeffrey made Murawski aware of the existence of Gone with the Pope.  Seventeen reels had been shot, and a rough assembly of the movie put together, but Duke had died before he had a chance to finish it.  Sensing a kindred spirit, he handed the reels over to Murawski, who embarked on a journey to complete the film.  Fast forward 15 years, and Gone with the Pope and Bob Murawski are having quite a week.  On Sunday night, he won his first Academy Award for editing The Hurt Locker, and on Friday he finally got to see Duke Mitchell kidnap the Pope on the big screen.

Why the Papal theme? At the Q & A following the screening, one audience member compared the film’s Catholic obsessions to those of other auteurs like Martin Scorsese of Abel Ferrara, and then wanted to know if Mitchell himself was religious.  Jeffrey Mitchell answered that the only time he ever thought of his father that way was when they were trapped in a small plane that was having engine trouble over the San Gregorio Mountains.  He said at that moment he looked back to see Duke Mitchell down on his knees. He may not have been a religious man, but even Duke would agree that the completion of his film is a minor miracle.”