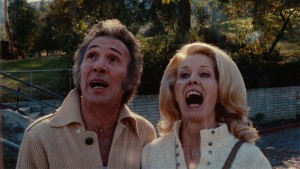 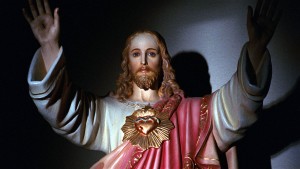 This Easter, home video audiences are celebrating the miraculous resurrection of Duke Mitchell’s GONE WITH THE POPE, the long-lost follow up to the smash hit MASSACRE MAFIA STYLE! At last, the cult hit hailed as “a glorious masterpiece” (Detroit Metro Times) is here on home video! 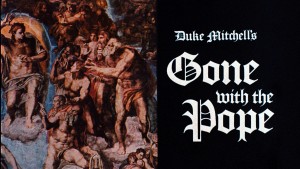 GONE WITH THE POPE played exclusively in 35mm at theaters and festivals around the globe for five years. The film has played repeatedly to an enthusiastic cult audience at the Quentin Tarantino-owned New Beverly Cinema in L.A. and the fantastic story of its unlikely rescue and restoration was featured in Variety, LA Weekly, Movieline, and the Los Angeles Times.

Now Grindhouse Releasing has at last answered years of worldwide demand for GONE WITH THE POPE on home video with a stunning deluxe Blu-ray/DVD set…and it’s a hit! Customers are already calling it the cult Blu-ray release of the year!

Buy GONE WITH THE POPE, available now from Grindhouse Releaelesing.

Available now, along with Grindhouse Releasing’s acclaimed, best-selling new Blu-ray editions of MASSACRE MAFIA STYLE and Lucio Fulci’s THE BEYOND, Duke Mitchell’s GONE WITH THE POPE is being hailed as a miracle by fans and critics alike!

“There’s miracle work, and then…well, there’s this Blu-ray disc. I cannot get over how phenomenal Gone with the Pope looks in high-def. The clarity and staggering level of detail outclass just about every last Blu-ray release I’ve come across, regardless of age, budget, or marquee value. An absolutely incredible effort…Gone with the Pope is one of a kind: crude, violent, offensive, unapologetic, deeper than it lets on, and a hell of a lot of fun. I doubt if there’s any other filmmaker, dead or alive, who could pull this off the way Duke Mitchell does. I defy anyone not to be floored by the complete package that Grindhouse has assembled here, one that’s twenty years in the making. The visual and aural presentation eclipse anything I ever could’ve dreamt possible for a lost production like this, and the sprawling selection of extras hammer home just how much of a labor of love this is. Highly Recommended.” – DVD Talk 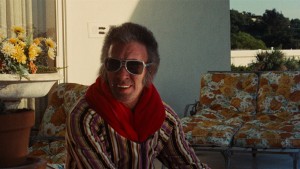 “Gone With The Pope is testament to how ambition and passion are always more important than a big budget or a famous cast. It’s a film like no other, an eighty-two minute barrage of ideas that are simultaneously insane and profound as Mitchell takes on the hypocrisy of organized religion without ever really writing off the spiritual side of life. It’s a skewed and strange vision to be sure but it’s relentlessly entertaining, as politically incorrect as they come and really just a wild ride all together. Grindhouse Releasing have rolled out the red carpet for the film, giving it the best possible presentation and jamming the disc with extras that are as interesting as they are comprehensive.” – Rock! Shock! Pop!

“Grindhouse Releasing kills it with this release of a long lost and unfinished film that will turn in to a classic piece of exploitation. A beautiful restoration job and lovingly packed with special features, GONE WITH THE POPE is a must own for any exploitation film fan!” – Celluloid Terror

“Grindhouse Releasing’s work here has resulted in one of their finest achieve­ments. They went beyond hon­or­ing a film’s legacy here: they actu­ally res­ur­rected, restored and fin­ished an aban­doned work. They really earned their tag as “the Criterion Collection of exploita­tion” with this impres­sive set.” – Schlockmania

“I’m happy to say that it was worth the wait. Gone with the Pope – as well as Grindhouse Releasing’s presentation of it – surpassed any expectation that I had. Very weird, very 70s, and very much the product of an individual who knew exactly what he wanted. It’s a shame that Duke Mitchell didn’t live long enough to see his work get the treatment that it is getting now, but he can rest easy know that it is in great hands and it looks f*cking amazing. Another indispensable release from Grindhouse Releasing.” – Paracinema 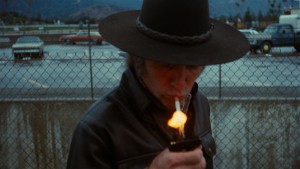 GONE WITH THE POPE is continuing to run in 35mm in theaters. The movie was featured in the 2015 Boston Underground Film Festival and opens this Friday, April 10 at the Gateway Film Center in Columbus, OH. http://gatewayfilmcenter.com/gone-with-the-pope-35mm/

Bob Murawski on the Restoration of GONE WITH THE POPE

Revisiting GONE WITH THE POPE, The Exploitation Jewel with an Unlikely Oscar Twist

Grindhouse Releasing is a Hollywood-based film distribution company co-founded in 1996 by Sage Stallone and Academy Award-winning film editor Bob Murawski. Devoted to preserving, restoring and releasing the best in exploitation cinema, the label has earned the rep of “The Criterion Collection of cult” for its no-expense-spared restorations of such celebrated Italian horror films as Lucio Fulci’s THE BEYOND, Umberto Lenzi’s CANNIBAL FEROX, and Ruggero Deodato’s CANNIBAL HOLOCAUST. Through the Box Office Spectaculars imprint, Grindhouse has released David Durston’s I DRINK YOUR BLOOD, Lucio Fulci’s CAT IN THE BRAIN, and J.P Simon’s chainsaw classic PIECES.

Grindhouse Releasing once again scored a #1 Amazon best-seller in 2015 with the lavish 3-disc Blu-ray/CD release of Lucio Fulci’s THE BEYOND, sure to top the list of the year’s best horror discs. MASSACRE MAFIA STYLE and GONE WITH THE POPE are among the most long-anticipated titles in the Grindhouse Releasing catalog and the lvish Bu-ray/DVD sets are rapidly gaining acclaim as some of the studio’s finest work to date. Grindhouse Releasing is also the most active independent theatrical distributor of classic horror and exploitation films in the U.S., handling Sam Raimi’s original classic EVIL DEAD and other genre landmarks in addition to its own catalog of titles. Upcoming Blu-ray releases from Grindhouse include CANNIBAL FEROX, out May 12, and more to be announced soon! 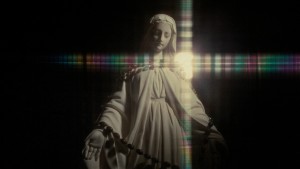 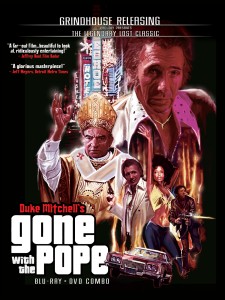 Duke Mitchell’s GONE WITH THE POPE

Buy GONE WITH THE POPE, available now from Grindhouse Releasing.

I WANT A DOLLAR FROM EVERY CATHOLIC IN THE WORLD!

“An exemplary piece of exploitation entertainment”

“A far-out film…beautiful to look at, ridiculously entertaining!”

Lost for over 30 years, GONE WITH THE POPE stars famed nightclub performer Duke Mitchell as Paul, a paroled gangster with an unholy scheme: to kidnap the Pope and charge “a dollar from every Catholic in the world” as the ransom.

Shot in 1975, GONE WITH THE POPE was unfinished at the time of Duke Mitchell’s death in 1981. Sage Stallone and Bob Murawski of Grindhouse Releasing rediscovered GONE WITH THE POPE in 1995 and vowed to save it from obscurity. Academy Award-winning film editor Murawski (THE HURT LOCKER, ARMY OF DARKNESS) spent 15 years completing GONE WITH THE POPE from the surviving film elements.

GONE WITH THE POPE has screened exclusively in cinemas since its sold-out Hollywood premiere in 2010. This home video debut follows Grindhouse Releasing’s Blu-ray/DVD release of Duke Mitchell’s MASSACRE MAFIA STYLE, now set to arrive Feb. 24 along with the company’s long-awaited Blu-ray edition of Lucio Fulci’s THE BEYOND.

Grindhouse Releasing will celebrate the upcoming Blu-ray/DVD releases of MASSACRE MAFIA STYLE and GONE WITH THE POPE with a rare 35mm screening of both films Feb. 10 at the New Beverly Cinema in Los Angeles.

Duke Mitchell’s MASSACRE MAFIA STYLE and GONE WITH THE POPE are two of the most long-awaited and requested titles in the Grindhouse Releasing home video catalog. Founded in 1996 and known as the Criterion of cult cinema,  Grindhouse Releasing has released Blu-ray editions of THE SWIMMER, starring Burt Lancaster, THE BIG GUNDOWN, starring Lee Van Cleef and Tomas Milian, CORRUPTION, starring Peter Cushing, and AN AMERICAN HIPPIE IN ISRAEL, starring Asher Tzarfati and Shmuel Wolf, The company scored a #1 best-selling hit in 2014 with its deluxe Blu-ray release of Ruggero Deodato’s notorious CANNIBAL HOLOCAUST.

Grindhouse Releasing is also one of the most prolific theatrical distributors of classic horror and exploitation films in the United States. THE BEYOND, CANNIBAL HOLOCAUST,  the midnight hit TRAILER APOCALYPSE and other Grindhouse Releasing titles are all making the rounds of of cinemas across the country now.  For theaters and dates, visit www.GrindhouseReleasing.com.

GONE WITH THE POPE SPECIAL FEATURES

– Footage from the 2010 Hollywood World Premiere 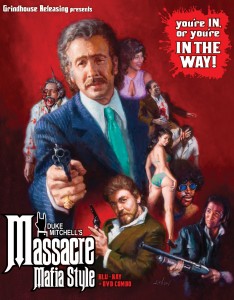 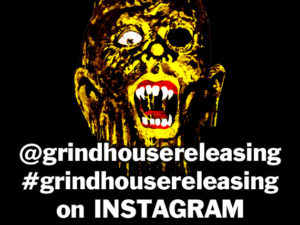 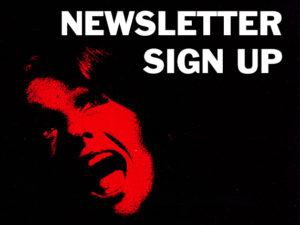